Data from the 2019 Audit of Political Engagement and Twitter show that, among people who use social media for politics, Labour is over-represented relative to Conservatives, and Remainers relative to Leavers – but, in the European elections run-up, content from the Brexit Party is shared more than content from the ‘Remain’ parties combined. 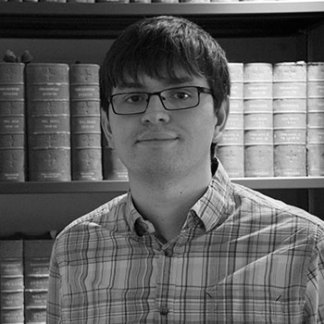 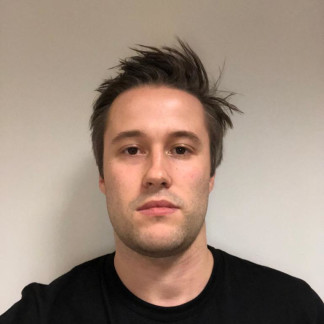 Oliver Beatson is a PhD student at the University of Manchester and part of the ESRC-funded Centre for Doctoral Training: Data Analytics and Society. His research focuses on the effects of increased social media usage on political engagement. He is supervised by Professor Rachel Gibson and Dr Marta Cantijoch Cunill. Oliver previously completed a BA in Politics at Sheffield Hallam University and a MSc in Politics with Research Methods at the University of Sheffield.

In recent years social media, particularly Twitter, has become an integral part of the way in which UK politics is both presented and consumed. Most MPs and political journalists have a Twitter account and regularly use it to engage with each other and the public – sometimes productively, but sometimes receiving abuse and intimidation. Meanwhile, political television shows promote their own hashtags, such as #BBCQT, driving engagement and debate during election campaigns. Tweets are also regularly used as the basis for a news story, talk show segment, or to represent public opinion.

Social media is, then, increasingly central. It is often assumed that it is younger, liberal and left-wing people who dominate, but more recently we have seen that politicians and activists on the right can also build up a substantial following and influence the debate. So who exactly are the people engaging online? How successful are the parties’ Twitter accounts in engaging people? And, heading towards the European Parliament elections on 23 May, is it ‘Remain’ or ‘Leave’ parties that are winning out?

Studies internationally show that politically vocal Twitter users are generally not representative: for instance, they often lean left in their attitudes. In the UK, studies show that users of social media overall – not just for politics – skew left in their attitudes and party support. Twitter users in particular lean heavily towards Labour, with Conservative voters being outnumbered 2 to 1 by Labour voters as of 2017. Research on the 2017 election suggests that Labour supporters may engage more, as hashtags relating to Jeremy Corbyn and the Labour Party won the Twitter battle.

Yet, though we know that social media in the UK is unrepresentative, we don’t know the make-up of people who use social media for politics specifically. We also know little about how the important political divide which has surfaced over Brexit has manifested online.

Who is engaging online?

In the Hansard Society Audit of Political Engagement 15, published in 2018, the survey introduced a battery of questions about online engagement, asking what people had done in the last 12 months. This was expanded in the 2019 Audit (Audit 16, APE16). In this post, we look at eight activities relating to social media engagement, shown in the table below.

In the last 12 months have you done any of the following? 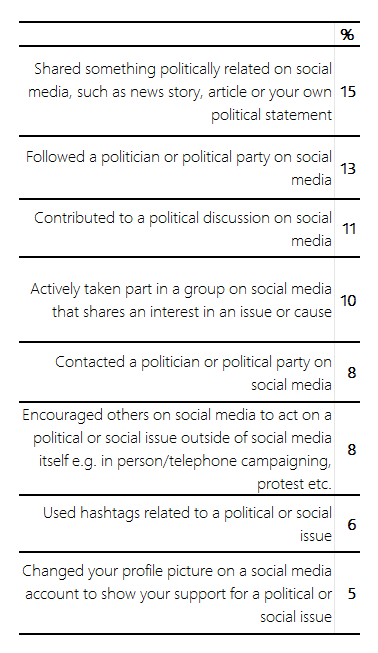 We defined the 30% who did one or more of these activities as ‘social media engagers’. The Audit survey also asked people which party they would vote for in an immediate general election, and how they voted in the 2016 EU referendum. In the following chart, we compare the party support of ‘social media engagers’ against the whole population. (Those undecided about their party choice were reassigned on the basis of the party they were ‘most inclined to support’.) 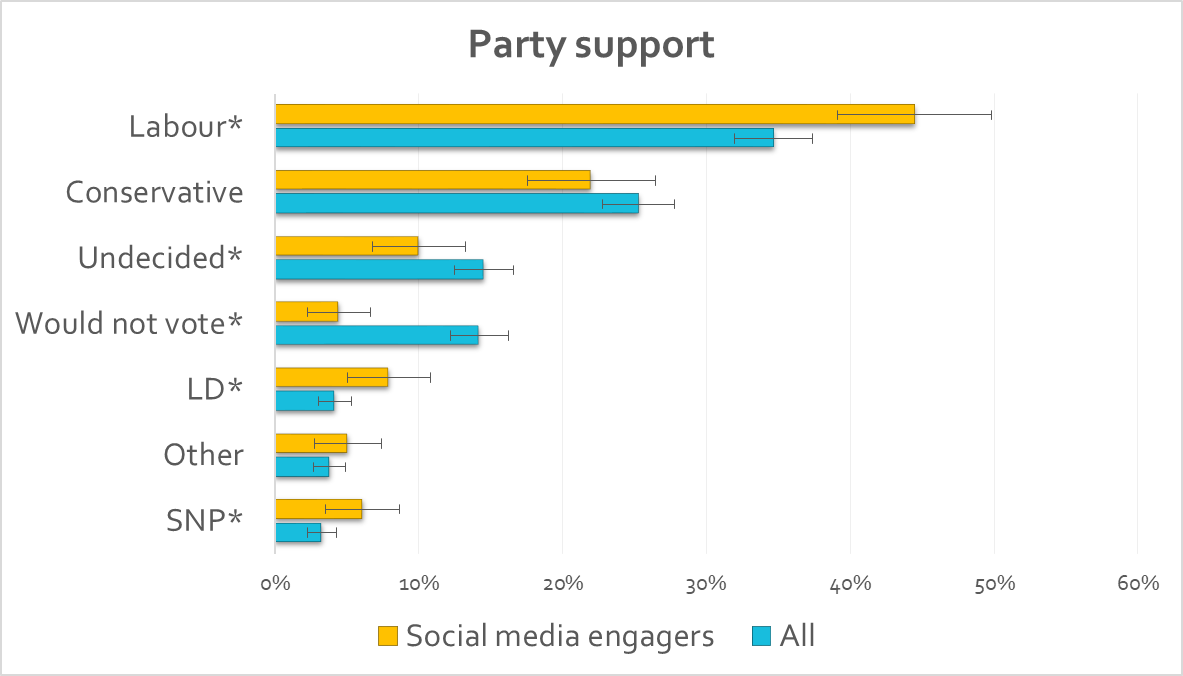 Where the y-axis labels are marked with an asterisk, this means the difference was significant: that the group is over- or under-represented among ‘social media engagers’. The black bars indicate that the true value is 95% certain to fall within the upper and lower end. APE16 data was collected before the formation of the Brexit Party and Change UK. Source: Hansard Society Audit of Political Engagement 16, 2019

As we’d expect from earlier analysis, Labour are over-represented among ‘social media engagers’. The Liberal Democrats are also notably over-represented, although their presence is only strong in relative, not absolute terms; the same pattern is clear for the SNP. The under-represented are, unsurprisingly, non-voters, but also the undecided: political social media seems to be better at engaging those with existing party support than those in the market for a party.

However, it is Brexit where we see the most dramatic differences. 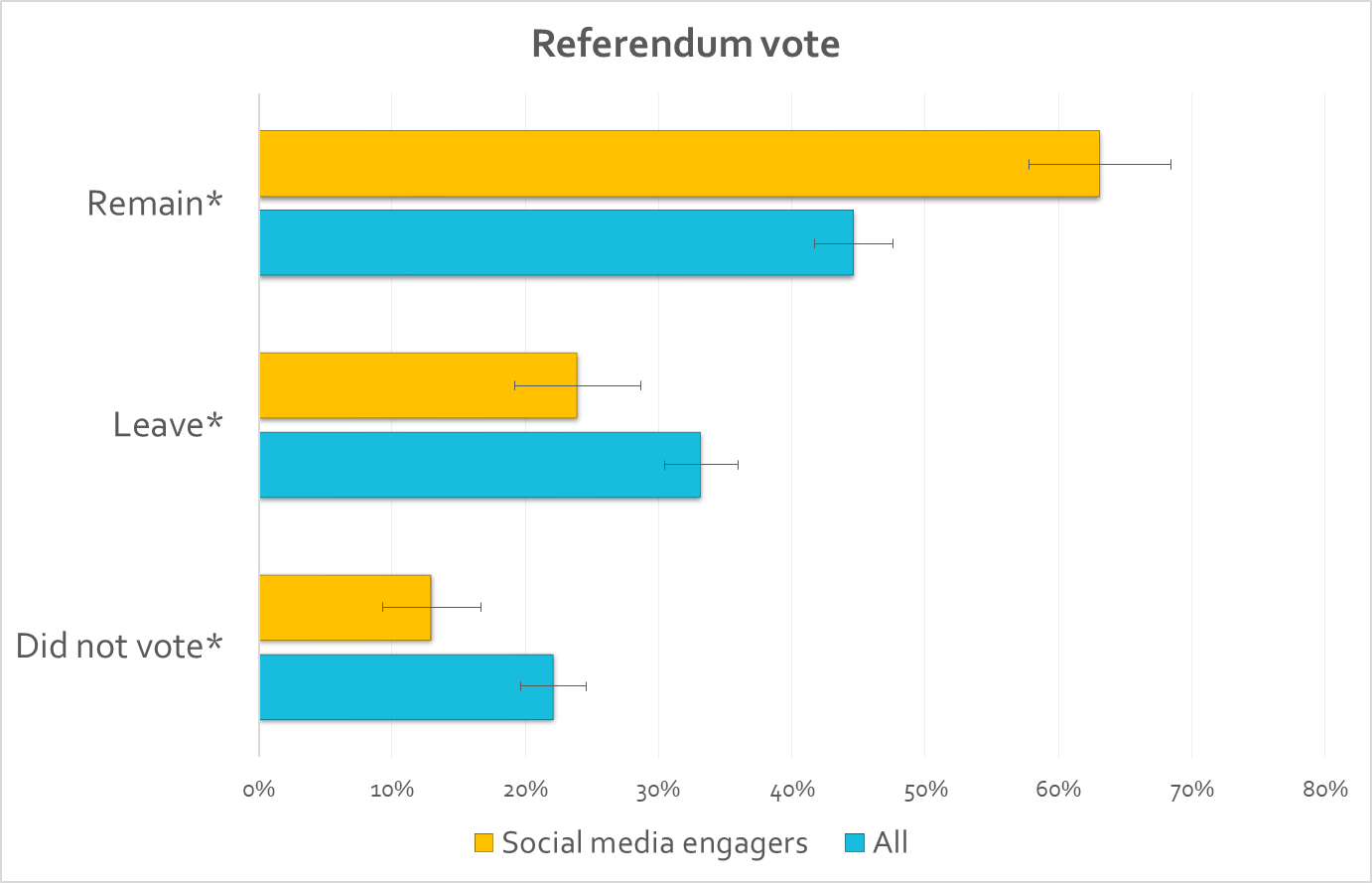 Where the y-axis labels are marked with an asterisk, this means the difference was significant: that the group is over- or under-represented among ‘social media engagers’. The black bars indicate that the true value is 95% certain to fall within the upper and lower end. Source: Hansard Society Audit of Political Engagement 16, 2019

Again, non-voters are not engaging, but more important is the Leave-Remain split. Among the general public, Leavers are not greatly outnumbered, with a gap of 11 points to Remainers. Among social media engagers, however, Leavers are outnumbered by nearly 3:1.

Which parties are winning social media?

Given the politics of social media engagers, it should be obvious which parties would do better on social media. Among the two main parties, Labour should be outpacing the Conservatives. Meanwhile, we would expect ‘Remain’ parties to garner substantially more engagement than ‘Leave’ parties. We define ‘Remain’ parties as those parties which advocate a second referendum or revocation: the Lib Dems, the Greens, the SNP, Plaid Cymru and Change UK. ‘Leave’ parties, meanwhile, are those which advocate a ‘No Deal’ exit: UKIP and the Brexit Party.

To test these expectations, we looked at how well parties performed on Twitter, where data is relatively easy to access and where retweets easily measure success. The tweets were collected through the Twitter API from 29 April to 6 May 2019, a period that covered the day of local elections in England, on 2 May, as well as three days before and after.

There are some limitations to bear in mind:

What did we find? First – as expected – Labour is well ahead of the Conservatives in engagement. The sheer size of the gap, however, is more surprising: the Conservatives received one retweet for every 11 achieved by Labour. Yet the story here is not just of Labour’s success. In fact, the Conservatives did the worst of any party we looked at, supporting the concerns of many of their activists that the Tory message is ‘barely being heard’ on social media.

The results for ‘Remain’ and ‘Leave’ parties were, however, completely counter to expectations. In total, the ‘Leave’ parties received more retweets than the ‘Remain’ parties: a major surprise, given the ‘Remain’ leanings of ‘social media engagers’. This was almost totally driven by the success of the Brexit Party: at over 41,000 retweets, they dwarfed even Labour’s total. This can be seen in the graph below. They also had more individually successful tweets than any of the Remain parties. The new ‘Remain’ party – Change UK – compares poorly. Furthermore, though the private ambition of Change UK is reportedly to replace the Lib Dems, they are not achieving that on Twitter. The Lib Dems, and the Greens, are getting much more engagement. 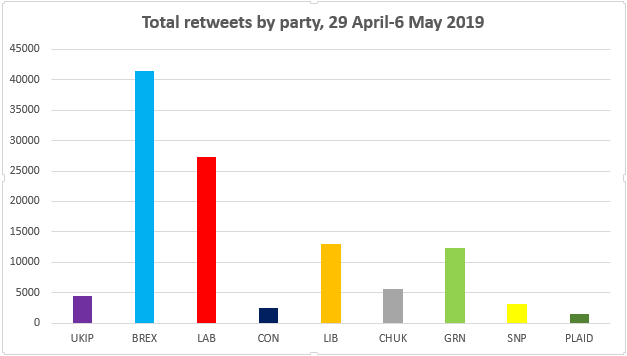 Why might the ‘Leave’ parties be winning the Twitter war? There may be several factors, not all about their actual output on Twitter. Many Remainers may be sticking with Labour, while more Brexit supporters desert the Conservatives. There is a Brexit party but no ‘Remain’ party: not everyone knows the Lib Dem, Green and Change UK positions. Studies suggest that success on Twitter has a lot to do with media coverage: Brexit Party leader Nigel Farage’s success at occupying the spotlight might be paying dividends.

Yet content might matter, too. Studies show that political tweets with ‘moral-emotional’ language do best: the Brexit Party’s emotive ‘betrayal’ narrative is thus perfectly suited to the platform. Brexit Party tweets also seem to play more on people’s sense of ‘Brexit identity’, often using the word ‘Brexiteer’, whereas ‘Remain’ parties almost never use the word ‘Remainer’. As for Change UK, its Twitter account is simply hard to find, as the first Twitter account returned by a Google search for ‘Change UK’ is that of the completely separate campaign organisation ‘Change.org’, and Change UK’s Twitter handle was recently tweaked, leaving the vacated handle to be hijacked by Brexiteers.

From the Audit of Political Engagement data, we confirm that those who are politically active on social media are not representative of the wider population. Of the main parties, Labour supporters outnumber Conservatives, which is reflected in Labour’s much greater success on Twitter. But while Remainers vastly outnumber Leavers among ‘social media engagers’, it is the Brexit Party that is winning the Twitter war in the run-up to the European elections. The reasons are likely complex, and though having an accessible and powerful message matters, some of the factors are probably out of the parties’ control. Nevertheless, the implication is that – online as well as offline – the Brexit Party and its supporters will continue to drive debate, even in a country split down the middle.