It’s a year since the House of Commons voted to proceed with the proposed multi-billion-pound refurbishment of the dangerously dilapidated Palace of Westminster. The vote was a clear step forward, and considerable progress has been made since, but the tight vote and opposition to full decant among Conservative MPs suggest the path ahead could remain rocky.

On 31 January 2018 the House of Commons voted to support the Restoration and Renewal of the Palace of Westminster (R&R). Crucially, the decision not only enabled preparation for R&R, but also specified that MPs and Peers would move out of the Palace while the work takes place: the ‘full decant’ delivery option. This was a surprise: while most MPs recognised the need for the repairs, many were strongly opposed to the idea of closing the Palace for the estimated six years R&R will take.

Full decant was recommended by the Joint Committee on the Palace of Westminster, a select committee chaired by two Cabinet ministers which reported in September 2016.

Despite the Joint Committee’s recommendation, when the government - 73 weeks after its publication - scheduled a debate on the Joint Committee’s report, it tabled two motions, neither of which proposed moving out of the Palace. While both motions endorsed R&R, the first sought to delay a decision on the works until the end of this Parliament, while the second called for a further review on how the work should be carried out. The government also insisted that the motions would be unamendable, preventing MPs from backing decant.

This procedural position proved untenable, and five amendments were tabled across the government’s two motions.

The key amendment was drafted by Chris Bryant MP, the Labour Chair of the Finance Committee, and Sir Paul Beresford MP, the Conservative Chair of the Administration Committee. It asked MPs to endorse “the unanimous conclusion of the Joint Committee that a full and timely decant of the Palace is the best and the most cost-effective delivery option”. The Labour Chair of the Public Accounts Committee (PAC), Meg Hillier MP, agreed to table the amendment: the PAC had endorsed full decant in 2017, and Hillier had vital credibility across the party divide.

With the amendment tabled, Bryant and Beresford sought to gather the support of other select committee chairs. By the day of the debate, 16 chairs had added their names, including the Chair of the Liaison Committee, and - crucially, given the estimated £3.5 billion cost - the Chair of the Treasury Committee.

Ahead of the debate, there was no clear indication of the likely outcome. Sam Coates of The Times suggested that “if you’re not confused about what’s going on with the Restoration and Renewal debate then you haven’t been listening closely enough, because it is hellishly confusing”.

Part of the confusion stemmed from the complex governance of the Palace of Westminster. The R&R programme relies on the government for funding and legislative time, but remains a matter for Parliament. This was emphasised when the Leader of the House of Commons, Andrea Leadsom, opened the debate by speaking to the two conflicting motions, and then noting that the government was not taking a position. She added, however, that she would be supporting the second motion, stressing the need for action, but also for further work on which delivery option would provide best value for taxpayers.

The key factors behind the vote

In the debate, MPs expressed serious fears about the risks the Palace building posed, and the dangers of delaying repairs. Just seven months after the Grenfell tragedy, the potential for a major fire was in the minds of many. Former Minister for the Cabinet Office Damian Green MP told the House:

It might be an exaggeration to say that Parliament is a death trap, but it would not be a wild exaggeration … We have already heard about the regular fires that break out. I think the Leader of the House said that there have been 60 over the past 10 years, and 12 in the past year alone. Chunks of masonry have fallen off high parts of the building. We are lucky that no one has been killed so far because of this. It is not remotely conceivable that people would be allowed to work here if this were a normal building, let alone that thousands of tourists would be allowed to visit it.

Without the usual party whips corralling MPs to vote a particular way, an unofficial whipping operation took place, both for and against the Hillier amendment. The former, led by Bryant, achieved the vital support of the Labour frontbench, including not just the Shadow Leader of the House, but also the Leader of the Opposition and the Shadow Chancellor. Indeed, only 10 Labour MPs voted against the Hillier amendment, which was passed by 236 votes to 220. While a number of senior Conservatives did vote in favour of Hillier (the support of Green, and Sir Patrick McLoughlin, in particular, was viewed as critical), the party divide is clear from Figure 1 below.

Figure 1: The party split on the Hillier amendment, 31 January 2018 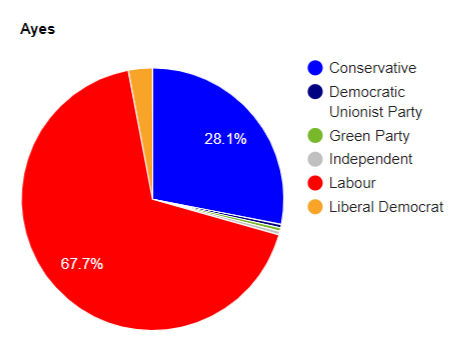 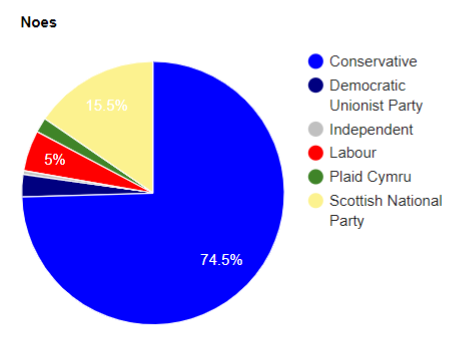 Compared to the Hillier amendment, the main motion as amended was passed with a more comfortable majority of 49.

MPs have told me, in the course of my research into the R&R process, that the result was a surprise to the Prime Minister, who had been assured by her Chief Whip that the amendment would fail. Instead, on an issue neglected for decades, MPs demanded action.

Since the vote for decant

Six days after the Commons decision the Lords endorsed the Commons motion without a vote: the debate showed a clear majority in favour of full decant.

If MPs and Peers had hoped that their decision would be acted upon quickly, however, they were to be disappointed over the coming months, when progress again slowed to a halt.

MPs told me that the government had been unwilling to push forward on R&R, as full decant had been supported by only one in five Conservative MPs.

While interviewees from all parties praised Leadsom for her continued commitment to the issue, they believed the Chief Whip was blocking progress, with some MPs believing that he was doing so on the wishes of the Prime Minister. Almost six months after the Commons voted, the PM was put on the spot by Chris Bryant: at an evidence session with the Liaison Committee she expressed support for R&R for the first time, promising to introduce draft legislation to establish the necessary governance bodies.

The Draft Parliamentary Buildings (Restoration and Renewal) Bill was published in October 2018, and is being scrutinised by a joint committee. The governance bodies for the project are operating in shadow form. If the legislation is placed on the statute book without undue delay, work will begin in 2025, when MPs and Peers would move out. However, as Brexit continues to dominate political bandwidth in Westminster, securing the necessary legislative time will be a challenge.

It is perhaps unsurprising that the government is unenthusiastic about such an expensive project, opposed by many of their own MPs. However, with the risk of a major fire or flood increasing year by year, further delays could be catastrophic.